(By ‘here’ I mean on my dining table. Though you can actually buy it here.) 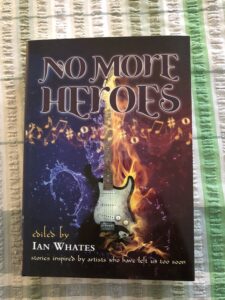 I was delighted to be invited to contribute to this anthology, which was originally inspired by the loss of several musical legends over too short a period a few years back.

One of those legends was Bowie, who is my first last and everything music-wise, though I have very wide musical tastes. The chance to write a story featuring/inspired by the Genius of Rock would have been amazing, but Alison Littlewood had already nabbed him, so to speak.

No worries though: that just meant a chance to develop a story idea that had been stewing in my back-brain for some time, which I’d been thinking of as the ‘Hotel California in space’ story. It’s actually called ‘Ninety-Seven-Point-Six’, and is in memory of Glen Frey of the Eagles. And it’s in some amazing company in this book.